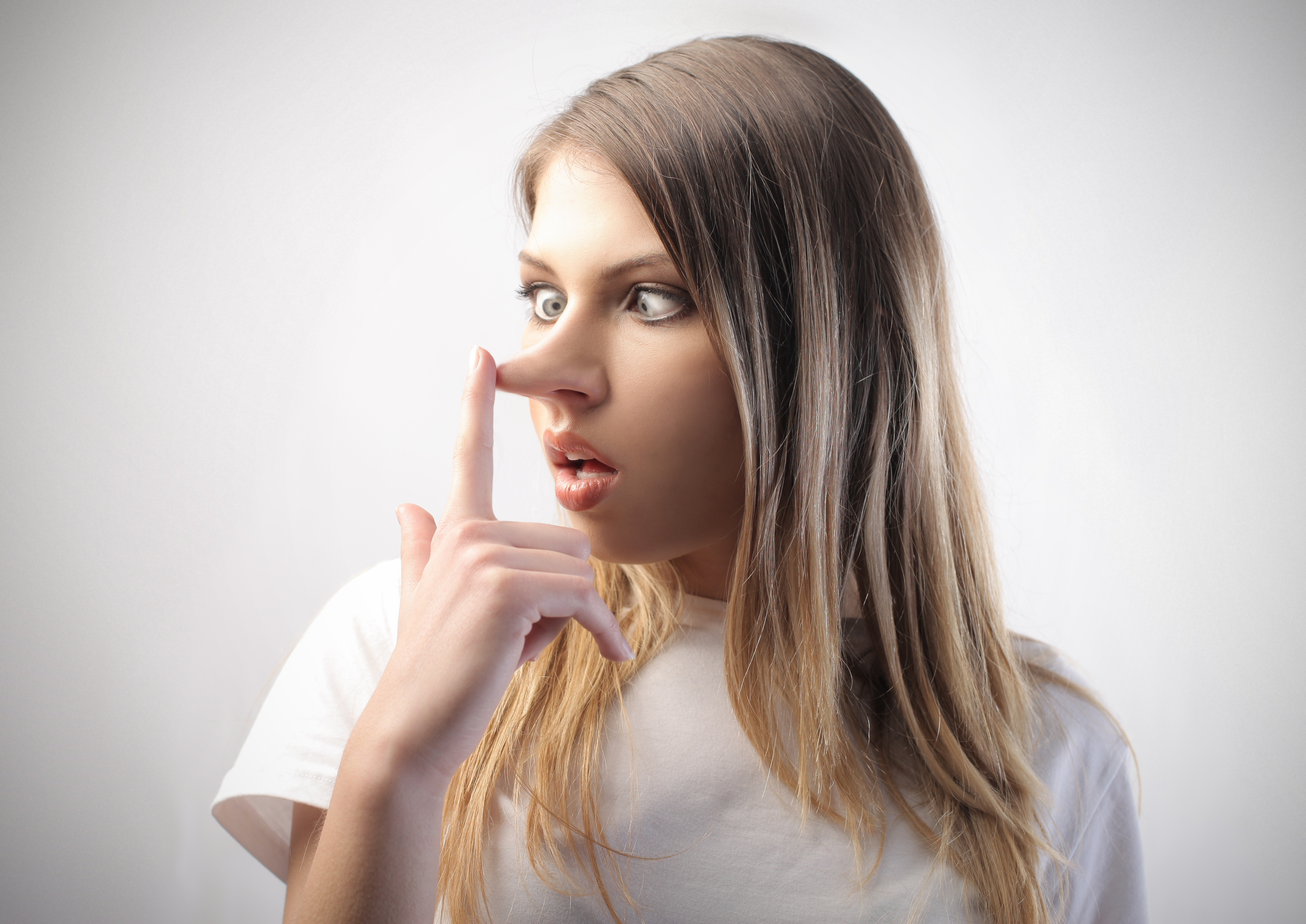 A while back, we published a pretty controversial blog about some of the most common lies candidates will tell on their CV.

And, as predicted, some people thought that was a wee bit cynical of us…

Well, unfortunately, after 20 years of recruiting, there is one thing that we know all too well…

Even in an average 10-minute conversation with a stranger, psychologist and lying-specialist Robert Feldman reckons that we will lie three times.

And if you actually think about it, interviewees would be mad not to embellish and exaggerate their strengths during interviews, whilst underplaying their weaknesses… we all do it.

The essential first step to spotting a liar is to establish a baseline.

Identify a topic that you could ask about at the beginning of the interview, which the candidate wouldn’t need to lie about, but would have to consider before answering, for instance, “how long have you lived in {location}?”

As the candidate considers the question and responds, scrutinise the movement of their eyes, the way they move in their chair and even the way they breathe.

This is the baseline of that candidate’s honesty.

Body language deviations from this norm could alert you to a lie.

Poker players use a similar technique to discover their opponents’ ‘tells;’ body language signals that reveal bluffs and even double-bluffs.

Of course, there are also some general body language trends that you should be looking out for so we’ve compiled a list of the 5 most important ones, this week…

(Of course, these relate to interviews but could be transferred to every day life too).

If a candidate can’t look you in the eye and looks ashamedly at the floor, it’s pretty clear that something’s wrong, but an accomplished liar, skilled in the art of deception won’t crack so easily under the pressure!

Look out for deviating eye movements.

Myth buster: It is generally believed that right-handed people will look to the right when recalling something honestly however, you know what assuming does…

It’s far more reliable to look out for sudden deviations from the candidate’s “eye-language” baseline.

For example, if your interviewee consistently looks up and to the left when answering questions, then suddenly looks up to the right when you ask why they left their last job, they’re probably fabricating a falsehood.

This really isn’t a foolproof method from lie detection and as such, you should take it with a pinch of salt.

Use the basics as a tool to identify a potential issue or fabrication and then investigate further, with trickier, probing questions.

It’s also pretty important NOT to make it obvious that you’re scrutinising a candidate’s eye language… (staring into their eyes unblinkingly is just creepy).

Recruitment is a two-way street and you don’t want to sabotage the entire interview by scaring them away.

Myth Buster: it simply isn’t true that liars will give themselves away with strangled, high-pitched tones. In fact, the voice can naturally appear higher due to a heart rate increase, because of stress.

Now, I wonder why a candidate might be stressed in an interview…

Things to actually look out for…

Any substantial changes in tone, from suddenly dropping an octave to slowing or speeding up speech dramatically, implies that the candidate’s answer isn’t coming naturally to them.

Again, this could imply that they can’t quite find the right words to say, so they’re fabricating a story.

If you really hit a nerve, a candidate might literally dry up completely as the central nervous system reduces salivary flow. Your subject will have to stop and clear their throat.

Have you ever listened to a five minute answer to a straightforward question and been genuinely confused as to what just happened? Chances are you’ve been lied to! A good liar will take the opportunity to cloud a simple issue, including masses of detail to deflect your attention.

Liars may try to distance themselves from their fabrication. If an interviewee starts to speak in truncated sentences, dropping “me”, “my” and “I” altogether or even speaking in third person, they could be telling a lie.

This too could be a sign that an interviewee is struggling to form a coherent and perhaps untruthful response.

Be cautious and use your initiative. If your gut is telling you that something’s not quite right, then dig deeper.

You should also be wary of candidates who nibble on and lick their lips in a flirtatious manner. They could be trying to mask lies and inadequacy.

(Or they could just like the look of you, I suppose…)

We mentioned a little bit about posture and general bodily conduct in the previous section ‘body language basics’ and it really is the easiest way to tell if someone is lying!

Let’s be honest, some candidates just fidget because they’re feeling nervous. But, if a candidate, who was previously calm and still, suddenly starts fidgeting a lotthen that heavily implies that something’s not quite right.

On the other hand, if your candidate suddenly goes very, very still, in fact noticeably so, then chances are they’re suddenly feeling uncomfortable and trying too hard not to fidget and give the game away.

The feet are a really great indicator. Too much shuffling can immediately reveal that a candidate is (subconsciously) desperate to run away.

Look out for the sudden shifts in posture, moving the head to the side and people picking at their fingers or skin to occupy their hands.

When someone lies, there is a natural tendency to cover up vulnerable parts of the body.

Covering the mouth is an obvious indicator, but the throat, chest and abdomen are also common places that people seek to protect.

If a candidate starts biting their lip nervously (and not flirtatiously as we mentioned above) it’s often a sign that the candidate is trying to get some feeling back into their mouth.

When apprehensively lying, the nervous system will stop sending blood to the extremities, as its focus is distracted elsewhere.

If you’ve ever watched Lie to Me, you’ll know what I’m talking about!

(If you haven’t and you’re remotely interested in body language, you should give it a go, it’s really interesting!)

Even the most accomplished liars will betray themselves, if you’re watching closely enough.

“Micro-expressions” can last as little as 1/25th of a second, according to Paul Ekman, Professor Emeritus of Psychology at the University of California.

There are tell-tale signs that reveal flickers of emotion, from anger to disgust, sadness to fear. Incredibly difficult to analyse accurately, micro-expression experts look for unexpected displays of emotion.

For example, you wouldn’t expect a candidate to display contempt in the interview, so if they did, you’d be at least a little worried.

Ekman contests that studying a person’s micro-expressions is the only consistent way of assessing whether they are lying or telling the truth.

For more important recruitment (like CEO positions) it could be worth hiring a micro-expression consultant, but in general, it’s a little too Hollywood for the average interview!

Instead, you might have to settle for reading good old normal expressions, like the ones to your right!

We spend our entire lives trying to surround ourselves with people we trust and distance ourselves from those we don’t. In the real world it comes down to gut feeling.

So ask yourself would you lend £20 to the person who’s applying for the job?  If the answer is absolutely not, you might want to consider your decision to employ them too.

Its amazing how well tuned we are to working out who is and isn’t lying.  In saying that, there are some brilliant liars out there who make everything sound plausible.

If something doesn’t sound or look right, rely on your gut instinct and question it further, and don’t be satisfied until you have a satisfactory answer.

You might still have been lied to of course, but the chances are your interrogation over a potential lie will have flushed out the truth, or at least a version of it.

A pinch of salt…

If you take a glance online, you’ll find heaps of body language resources, emphasising a wide variety of techniques to suss someone out by minor body language changes and involuntary actions.

In truth, you’d need a psychology degree (and more) to understand every micro-expression, twitch and movement.

Your assessment will be far more successful if you combine the general body language guidance sketched above with your own sense of intuition.