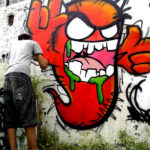 We are going all arty for this week’s task as the teams are tasked with finding a couple of ‘street’ artists and selling their work to the uber-trendy mob of the east end of London.

With her fantastic efforts in sprucing up charity shop furniture from a couple of weeks back, Gabrielle has grasped the chance at leading this arty task.  Whispering Tom will be leading the other team with his encyclopedic knowledge of street art, which I’m sure goes down a storm at dull dinner parties.

Both teams will also have to sell to their select corporate clients, which is Renault for Tom’s team and Beefeater gin for Gabrielle.

It’s a quick visit to the corporate clients first for both teams.

Tom impresses team Renault by going all va va vroom and telling them the piece of chosen art needs to have joie de vivre.   He also finds out how much Renault are willing to spend which is unfortunately something Gabrielle forgets to ask the stoic faced  people of Beefeater.

The teams have a bunch of artists to go and see to select who they want to work with.  They range from the pretentious to the slightly tapped.  I’ll let you decide which artist fits into which category.

First up is a young cool urban painter called Nathan Bowen.  His drawings look like they’ve been made by a toddler sitting on a tumble drawer with an Etch-a-sketch.  I don’t really understand the appeal.  Anyway, Nick says he wouldn’t pay for that and Ricky looks all confused.

Gabrielle’s team are cooing over Nathan’s work like he’s some kind of Da Vinci, which he isn’t.

Next up we meet Pure Evil, a quite ridiculous moniker for an artist.  Both teams are big fans of his pop-art meets Salvador Dalí spin, which are certainly more pleasant on the eye than Nathan’s work.  I’m a big fan of Dali myself and I’ve got a large print of Sleep, which I think is his finest work, hanging in my hall.

It quickly becomes apparent that Pure Evil will be the one artist that both teams want, so who is going to impressive him enough to seal the deal?

Tom thinks that by reeling off his knowledge about street artists that Mr. Evil will be like putty in his hands.  Andre the Giant on the west coast is followed by something about Space Invader.  Unfortunately Pure Evil looks bored.  Tom needs to take a leaf out of Gabrielle’s book and simply tell Dr. Evil he and everything he does is great.  That works much better.

Let’s see how out of his depth Adam is this week.  Art and Adam go hand in hand like a frown and Simon Cowell’s botoxed brow.  Adam accompanies Jade to meet an artist called Copyright and immediately starts fawning over a picture called ‘For every breath in a breath out’.  Adam then tells the artist that his interpretation of the piece is that, “we are all the same, but we are different”; oh dear.

Gabrielle’s team head out to see James Jessop, and a look at his over-sized monster themed prints.  At 18 foot tall, you would really need the most pretentious of barn conversations to house such a monstrosity.

Laura hates Jessop’s work as much as I do and describes it as an acquired taste.

Someone who should have gone a long time ago from the process is billy bigger liar, Stephen.  His art insight is that artists are “nutcases who can draw”.  Actually he may have a point when you think about the genii of Dali, Van Gogh, Picasso and Gauguin.

Gabrielle’s sycophantic approach to the artists has worked a treat, and her team get their chosen artists of Pure Evil and Nathan.  Tom failed to secure Pure Evil, probably because he reeled off a list of artists he preferred instead.

The news that Pure Evil has chosen team Gabrielle over team Tom has sent Tom into meltdown.  With a reddening face, all the cool and calmness he has displayed over the last couple of months has vanished.  He doesn’t really know what to do, so he decides to go with a risky strategy of trying to sell the expensive cartoon paintings of James Jessop.  One sale of these expensive paintings will see him win, but he is taking a huge risk.

The teams are back on Brick Lane, scene of their last crime against retail when they upsold their 2nd hand furniture.

This time around they have been given a gallery each and a load of wealthy punters.  They will get 40% commission from each sale, maybe I should get my crayons out?

Stephen continues his words of wisdom with talk about Nathan, their artist who is doing a live drawing, that he should do it away from prying eyes, you know like Banksy or the Stig or something? Gabrielle lets him down gently, something Lord Sugar should have done a long time ago.

I don’t like Nathan’s scribbled drawings and Ricky shares my views.  In the other team, Adam stares at the James Jessop creations, his brain trying to work out whether he likes them or not.

I like Tom, I still think he is the strongest candidate which may not be difficult looking at what’s left.  But his failure to get his chosen artist could cost him this week.  He starts well though by sharing a bit more knowledge about street art and charming the affluent crowd in the gallery.

Slimy Stephen is making a right pig’s ear of it, but this week’s biggest surprise package is Adam.  I’ve got a soft spot for Adam.  He may be as daft as a brush and gets all his morales from the Life on Mars box-set, but he is a trier and the Lord loves a trier.  This week he is like a Northern Brian Badonde but the public are lapping up his ignorant approach to all things arty.

Despite drawing a big crowd for his live art show, Nathan’s paintings are not selling, unsurprising given that are dreadful.

Laura, the self-proclaimed beauty, has forgotten how to sell, which is unfortunate.  She’s asks everyone how they are doing only for Adam to swoop in with some blunt price announcements.

Renault and Beefeater arrive at the two galleries.  Stephen is in charge of schmoozing Beefeater, something is carries out with all the charm of Dufrais Constantinople.  He doesn’t bother to greet them for 5 minutes and then hands them some generic white fizzy plonk.  They end up leaving after being treated like dogs, in their eyes anyway.

Tom does a better job with the Renault crew, spouting a few French verbs and telling them that what they need is le-erotic, and Renault leave suitably impressed.

Back in the bear pit of the boardroom and it time to compare strategy.  Tom admits his strategy was a bit on the risky side by going with James Jessop.  At least he did a decent job with Renault compared to team Gabrielle who blew it with the gin makers.

When pressed on why she didn’t ask Beefeater what their budget was, Gabrielle went all Pinocchio and said that she did it on purpose.  Stephen claimed it was ‘news to him’, despite standing next to Gabrielle when Beefeater asked if they had any more questions.

Despite Renault putting in an order and Beefeater not bothering, Gabrielle’s team win by making £4,579 compared to Tom’s £4,442.

The winning team get to go and paint on a giant canvas, another absolutely rubbish prize.  What happened to razzing around a track in a Porsche?

Looking down the barrel of a gun

In the battle of the final three, Tom has brought back Laura and Jade.  Teflon Tom got it wrong in the task this week, but big Al is on his side and he won’t be going anywhere.

The Lord loved the fact that Tom took a chance this week, although I suspect that if Stephen or Jenna had made the same faux pas that they would be out on their ear.

Tom sits back and lets the girls squabble it out for their Apprentice futures.

Oh dear, Laura has verbal diarrhoea and is talking about how no-one can put her under attack and how awesome she is and before you know it she’s got the finger of fate and she’s in the taxi going home.

Eight remain to battle it out for the £250k prize.  Tom could go on Countdown and spell a rude word and still get through, so it’ll be interesting to see who joins him in the final four for the interviews, my money is on Nick, Ricky and Gabrielle.
See you all again next week.